Also Hear This On:

Healing the Collective Traumas of Racism

Race isn’t real but racism has real-world consequences. We can’t realize our fullest human potential in a broken world. Our lives are interconnected and our collective trauma requires collective solutions. It’s time to heal the conditions, the traumas, and the systems of racism in order to reach our highest selves. Our show talks to the teachers, thinkers, healers and evolutionaries who are inviting us all to become the architects of the process of racial healing. Hosts Aliah MaJon, Gillian Shelley, and Joy Donnell guide listeners into the heart of why our divides exist and how we can begin to build a restorative culture.“This podcast is an invitation to all those who are willing to take this journey and be architects of the process of racial healing. Evolution is a stretch, but our convictions matter.” — Aliah MaJon

The Crossing and the Lynching Tree: A Requiem to Ahmaud Arbery

On February 23, 2020, Ahmaud Arbery, 25, left home and went for a jog. During his run, two white men follow Ahmaud, confront him with a loaded shotgun, assume he’s a suspected criminal, and within minutes of their encounter--according to the recorded video--three shots are fired. Amhaud falls to the ground and dies. “Racism is a virus. It infects the spirit.” (The Rev. Dr. Otis Moss III) The United Church of Christ invites you to rewatch Rev. Dr. Otis Moss III's cinematic sermon entitled, "The Cross and the Lynching Tree: A Requiem for Ahmaud Arbery." Immediately following the live video, a panel of four respected thought leaders, racial justice advocates and UCC pastors discussed the impact of historical and present-day acts of racism and violence towards African Americans. And they discussed how the Christian Church can be actively involved in dismantling racism.

" The Kenneth and Mamie Clarks' doll experiments grew out of Mamie Clark's master's degree thesis. They published three major papers between 1939 and 1940 on children's self perception related to race. Their studies found contrasts among African-American children attending segregated schools in Washington, DC versus those in integrated schools in New York. The doll experiment involved a child being presented with two dolls. Both of these dolls were completely identical except for the skin and hair color. One doll was white with yellow hair, while the other was brown with black hair. The child was then asked questions inquiring as to which one is the doll they would play with, which one is the nice doll, which one looks bad, which one has the nicer color, etc. The experiment showed a clear preference for the white doll among all children in the study. These findings exposed internalized racism in African-American children, self-hatred that was more acute among children attending segregated schools. This work suggests that by its very nature, segregation harms children and, by extension, society at large, a suggestion that was exploited in several legal battles"

Brown v. Board of Education & The Clark Doll Test

" The results of the test showed that the majority of black children preferred the white dolls to the black dolls, the children saying the black dolls were "bad" and that the white dolls looked most like them. To the Clarks, these tests provided solid proof that enforced segregation stamped African American children with a badge of inferiority that would last the rest of their lives. The argument swayed the US Supreme Court Chief Justice Earl Warren, in writing the Court's opinion, noted that the legal separation of black children gave them "a feeling of inferiority as to their status in the community that may affect their hearts and minds in a way unlikely to ever be undone."

Occasionally, biracial twins are born with clear skin-color differences. It’s a rare circumstance that’s been termed as having "biracial twins." Dr. Jim Wilson of the University of Edinburgh told the BBS back in 2011. 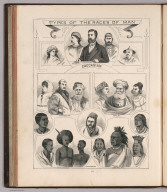 On display at the Whipple Library, Cambridge, the Crania Americans is a book described as the 'most important book in the history of scientific racism.' Current research into this book is revealing how racist ideas travelled between the United States and Europe in the 19th century. Crania Americana, published in Philadelphia in 1839 by Samuel George Morton, is being studied by Cambridge University PhD student James Poskett at the Department of History and Philosophy of Science. His research has uncovered, for the first time, just how influential this book was in scientific circles that included the likes of Charles Darwin and James Cowles Prichard.

“In the aftermath of the rebellion, white planters reacted with alarm to the anger they had seen among the black Virginians who had joined Bacon’s rebellion. “The planters had not been able to control this rowdy labor force of servants and slaves,” historian Ira Berlin told PBS. “But soon after Bacon's Rebellion they increasingly distinguish between people of African descent and people of European descent. They enact laws which say that people of African descent are hereditary slaves.”

Planters feared what their white indentured servants could do, so they slowly eliminated the system, relying instead on enslaved black people to work their plantations. Backlash from Bacon’s rebellion is credited with helping kick off the racial distinctions that defined the colonies and the United States that followed.